On Sunday 10th April our own Barrie Jones took to the ring in the the O2 arena in London to headline BKB25 in a World title fight against Jimmy Sweeney, who was considered the king of BKB. Barrie won the fight via a TKO in the fourth round to clinch the world title and bring the belts back to Wales - more detail on the fight available here 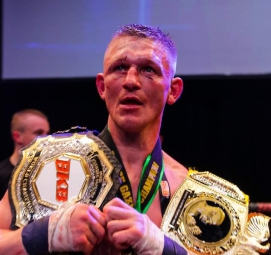 The draw for the RDFL League Cup has been made which involves all RDFL teams split into 4 groups, we find ourselves in an all Premier League group with Penygraig Utd, Porth Harlequins and Tonypandy Albions, fixture dates TBC. Each group winner progresses to the Semi Final

Others Groups
Group B

The draw for th Lucania Cup has been made with us away in round 1 to Treorchy BGC, date is still to be confirmed. A win in that would set up a second round tie away to Cwm Rhonnda with a potential Semi Final at home to one of the Penygraig's

Update 19th May - Following a meeting today the FAW have announced that the 2019/20 football season in Wales is to be ended, all leagues to be determined by the points per game basis - full details availabled here https://www.faw.cymru/en/news/faw-board-decide-curtail-national-leagues-season/

Update 15th May - Suspension extended until the 12th June

We have been draw at home in the Semi Final of the Lucania Cup where it is a repeat of last year's tie as we face Penygraig Utd, the game to take place on February 1st 2020

With the regular season expected to finish early an extra cup competition has been organised between the two divisions of the Rhondda League, all 17 teams have been placed into 3 groups of 4 and 1 group of 5 with the winners of each group progressing to the Semi Final.

We have been drawn in group B along with fellow Premier Division side Penygraig Utd and two sides from Division 1, Penygraig BGC and Llwynypia. We start the cup with an away game against Llwynypia before hosting Penygraig Utd, the final group game will see us travel to Penygraig BGC, date for these games are still to be confirmed. The winner of our group will face the winner of group D in the Semi Final

The club would like to announce the transfers of two former players who have returned to the club this week from Ynyshir Albions, Matthew Bishop and Daniel Evans. Matthew is back for his third spell with the club, his last time was 5 years ago and it's Daniel's second spell where he previously played for us back in the 2012/13 season.

After a season as player manager and guiding the club to its highest league finish for several years Nathan Williams has decided to step down from the role and return just as a player for the forthcoming season. The club would like to thank Nathan for all his hard work over the last year in what can be a thankless task at times. Tom Lewis will take over as player manager for the 2019/20 season

The majority of last years squad have re-signed for the 19/20 season along with new signings Nathan Oliver, Simon Warren, Joel Davies, Gareth Polston and the return of Gareth Smith who last played for the club 7 years ago

Our presentation day kicked off early with a friendly kick about between Past, Present and Future players in a 5-a-side tournament with over 30 players taking part. With 5 teams competing with a mixture of players it was the “Green” team who came away winners needing a penalty shoot-out to settle it.

The presentation continued into the evening back at our club house Tylorstown Rugby Club, who we would also like to thank for their continued support throughout the season.

It was a clean sweep in the awards department this year with Craig Jones taking all 4 trophies home, Most Man of the Matches (6), Top Goalscorer (20), Players Player and Player of the Year. This was Craig’s first season at the club joining 6 games in and played in every game from then on in scoring on average over a goal a game.

As the players take the credit for the on field performances massive thanks must also go to the two gentlemen who do the work behind the scenes to keep the club ticking over, Gareth Lewis and David Isaac, you don’t often see the work they do but if they didn’t do it the club would not function as well as it does

MOST MAN OF THE MATCHES - Craig Jones

13th Mar - Another transfer completed this week when another former player returned with Keiran Tann signing from Ton & Gelli, Keiran played for our under 16s & 18s before making his Senior Town debut in 2015

7th Mar - The club would like to welcome back Jordan Westcott after his transfer from Trebanog FC, Jordan last played for the club in October 2014

Over the Christmas period a game took place between a Stanleytown Select side made up of past players as they took on Ferndale Vets, players that came out of retirement for the game included Stephen Morris, Gareth Lewis, Gary Thomas, Andrew Riddiford, Stephen Thomas and Nicky Rees. In a well contested game played in good spirits it was The Town 11 who came away with the victory in what will hopefully be just the first of this annual fixture over the coming years

A welcome back to the club for Nathan Parry and Matthew Davies after their transfers from Ferndale BC. They join our strong squad for the 18/19 season along with new signing throughout the summer of Ashley Carbis, Kurtis Dalton, Micky Davies, Jordan Mainden and Karl Pugh.

Following the end of the 2017/18 season Gareth Hurton decided to step down as Manager after nearly two seasons in charge, which during his time he guided the club to their first trophy in 15 years by winning the Lucania Cup in April 2018. Although Gareth is no longer manager he will still be part of club committee and coaching team.

With several candidates showing an interest in the vacant managers position the job was offered to last years captain Nathan Williams as the man to take the club forward in a player/manager role. Nathan’s determination to get the club back into the Alliance League was a major factor in him being appointed and hopefully with the players at his disposal this season we can build on our cup triumph last year and mount a strong promotion challenge. Nathan will be assisted by Huw Evans who returns to the club after a short spell away and Tom Lewis. The new manager has been working hard over the summer building his squad for the new season and with the majority of last years squad re-signing plus a few new additions he has given himself a good headache ahead of the first game on August 18th when he names his first team of the season

The club are also looking for any local businesses who would like to sponsor the club for the 2018/19 season, any type of sponsorship would be appreciated but if there is any potential sponsors wanting to sponsor anything specific (kit, club tops, balls etc...) please contact the club for further details and packages available 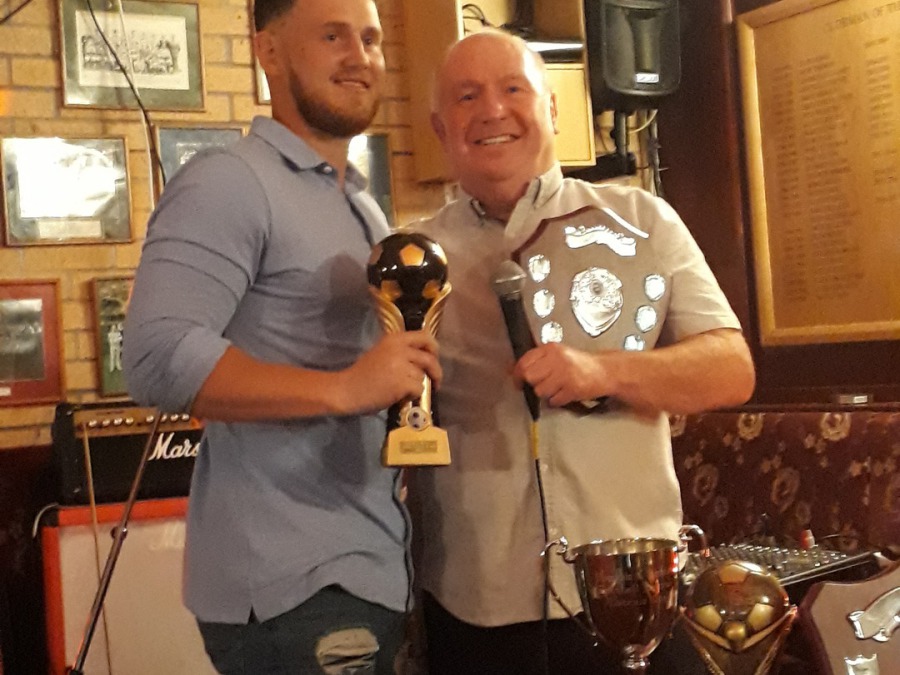 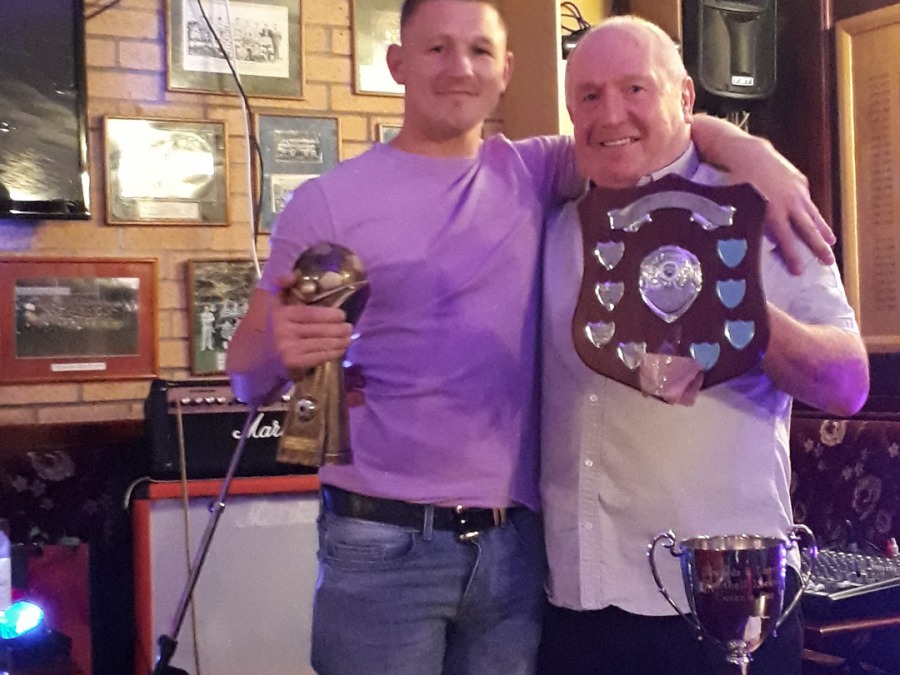 Player of the Year - Barrie Jone

Most Man of the Matches - Shay Rees 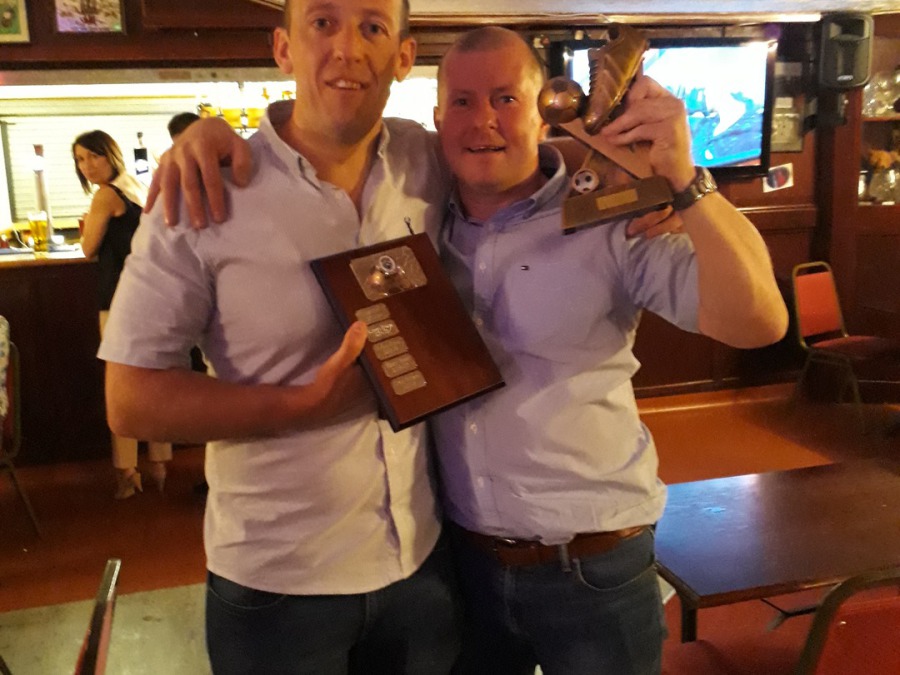 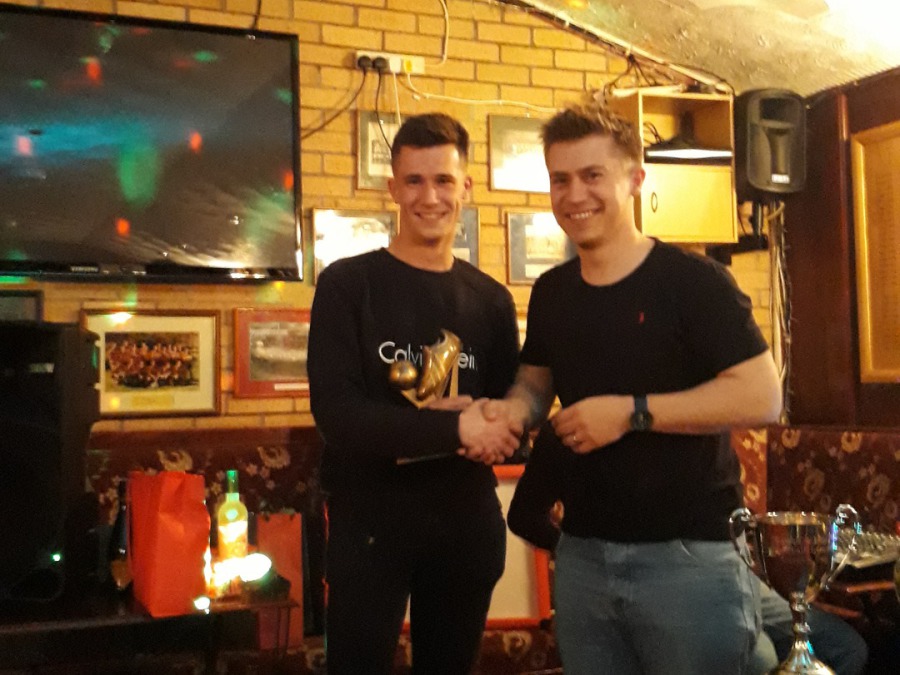 Photos from the Night

Stanleytown are the 2017/18 Lucania Cup Winners after beating The Baglan 2 - 0 in the final on Dinas Park. Our road to lifting the cup saw us involved in every round and score a total of 13 goals and conceding just the once. Our top scorer in the cup was Craig Williams who scored in every round scoring a total of 7 goals 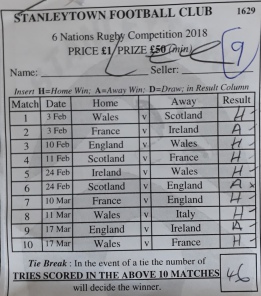 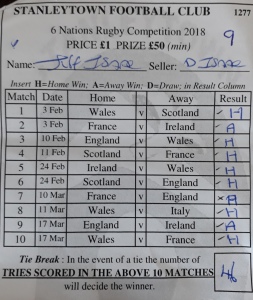 1 other also had 9 correct but missed out on Tries 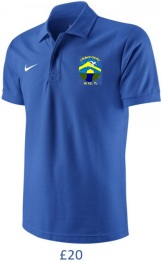 We have made a few more additions to the squad during the month with the experianced pair of Johnny Gardner and Ian L'Homme signing, Carl Semmens has also returned to the club and Liam Earland has joined us from Tonypandy Albion

The club would like to welcome new signings to the club during October, Matthew Broad, Matthew Davies, Jamiel Thirb and Thomas Harries, strong additions to the squad which will improve the side going forward

All other teams have a bye

The club has been busy over the summer period with some key signings on and off the field. We would like to welcome David Isaac to the club who joins our committee after several seasons with Maerdy Social, also joining us from Maerdy are returns to the club for Craig Williams and Garry Edwards along with Ryan Jones and Ceri Pike. Also returning to the club after several seasons away are Keiran and Mitchell Tann, Kurt Hughes and Martin Jones. Another three additions to the squad are Callum Williams, Michael James and Daniel Rees

As a club we are still looking for more people to help off the field, in particular we are looking for a first aid person for match days, if anyone is interested in this role or assisting in any other way please contact the club

The club are also on the lookout for any new sponsors for the 2017/18 season, any sponsorship would be appreciated but if there is any potential sponsors wanting to sponsor anything specific (kit, club tops, balls etc...) please contact the club for further details and packages available

MOST MAN OF THE MATCHES - Shay Rees

PLAYER OF THE YEAR - Jake Jones

MOST MAN OF THE MATCHES - Joe Bartlett 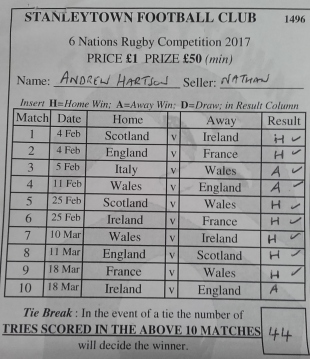 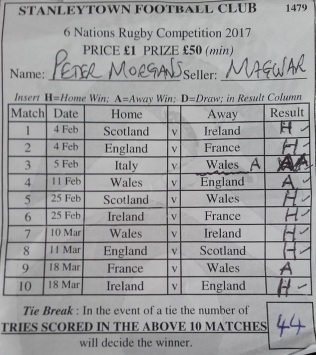 7 others also had 9 correct but missed out on Tries 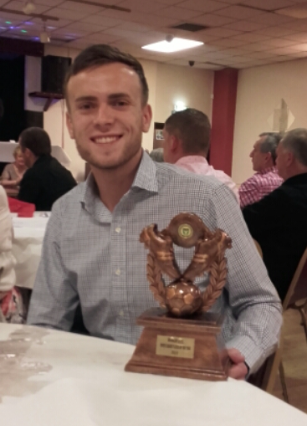 MOST MAN OF THE MATCHES - Callum Westcott

PLAYER OF THE YEAR - Shay Rees

MOST MAN OF THE MATCHES - Daniel Lowe

PLAYER OF THE YEAR - Jarrad Lewis

MOST MAN OF THE MATCHES - Joe Bartlett 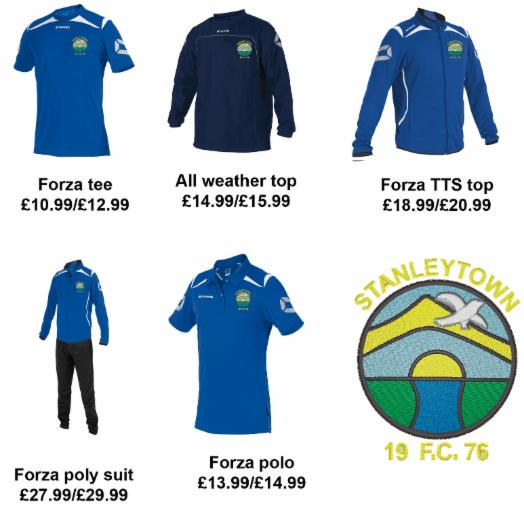